Of all of the breeds of dogs that I have drawn in my lifetime, spaniels must be the most frequent, followed close on the heels (or should I saw paws?) by Border Collies. 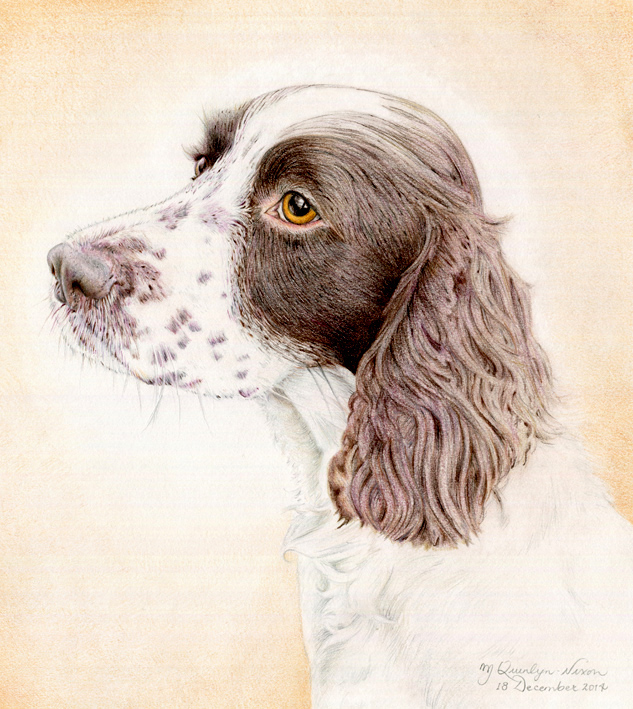 A couple of weeks before Christmas I was contacted by a very friendly gentleman, named Keith, who asked me if I could draw his daughter’s fiance’s dog. Within a few days I was being collected by Keith and taken to his home to photograph the dog, who turned out to be a highly intelligent and very active Springer Spaniel, by the name of Alfie. I love it when people arrange to have special and totally unique illustrations done for friends and relatives. There is usually so much thought behind these actions and it always speak volumes of how highly regarded the recipients are to those that commission the illustration.

It’s always lovely to draw people’s pets, but when you have met the pet and made their acquaintance it does make the illustration all the more special for me. Alfie had a lot of white fur, which was complemented by his dark chocolate fur and the amber tone of his eyes. He is a very handsome dog indeed and one that would be a lovely companion to a dog lover.

The illustration took a few days to complete and because of the large area of white on Alfie’s chest, I put in a suffused raw sienna tone behind him, to highlight the profile of his fur.

The commission was done in secret and collected by Keith, who was very pleased with the result… I heard later, that the illustration had been a big hit with the young gentleman, Marc, who had received the illustration on Christmas Day.

So, that is another spaniel to add to my collection…and he is soon to be followed by a Jack Russell and a West Highland Terrier. They do say that ‘variety is the spice of life’…

Christmas Eve has got to be one of the most exciting days in the calendar year, as so much work and effort has gone in to the festive preparations. Excited children await to see what Father Christmas has brought them and eager parents await the joy they hope to see in their children’s eyes on Christmas morning.

I have for many years enjoyed the expectation that arrives with Christmas Eve and to enjoy this much more than the actual day of Christmas. There’s something exciting about the promise of Christmas Day that I find rather magical. 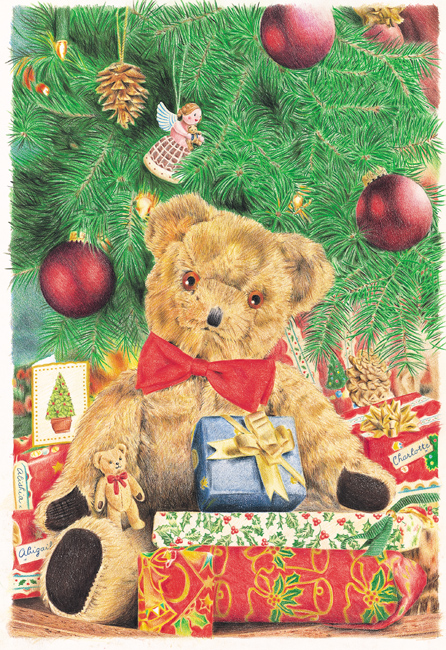 The ‘Christmas Eve’ bear-a-thought illustration was one of the first illustrations that I created for my first-ever calendar which was produced in 2002 (the centenary year of the teddy bear). I had just decorated the tree when I did the preliminary sketches and took some photographs to work from. This was the first teddy bear I was ever given, and was presented to me by my Grandmother and Grandfather Lake, so was the ideal choice for my first teddy bear Christmas illustration. Along with the teddy, is the hand-painted angel decoration from Cologne market (mentioned in my previous post) and a homemade fir cone decoration. I tried to create the warmth of Christmas in this illustration with a slight fireside glow to the image. I loved drawing all of the patterned wrapping paper, but got the needle (pardon the pun) whilst drawing all of those prickly branches…

Looking back at this illustration, which I produced over twelve years ago, it takes me back to my childhood – with real Christmas trees (that shed needles everywhere) and real open fires which warmed us on cold and frosty mornings. It brings back memories of waking up tired parents at ‘silly o’clock’ in the morning, because I couldn’t wait to see what presents lay ‘nestled’ under the tree for me and my siblings.

Merry Christmas and thanks for reading my posts throughout 2014.
Michael

This little teddy bear and myself have got something in common; we both deserve a well-earned rest. I’m having a day or two away from the drawing-board. Perhaps I’ll manage to tackle my jungle of a garden…(or not). 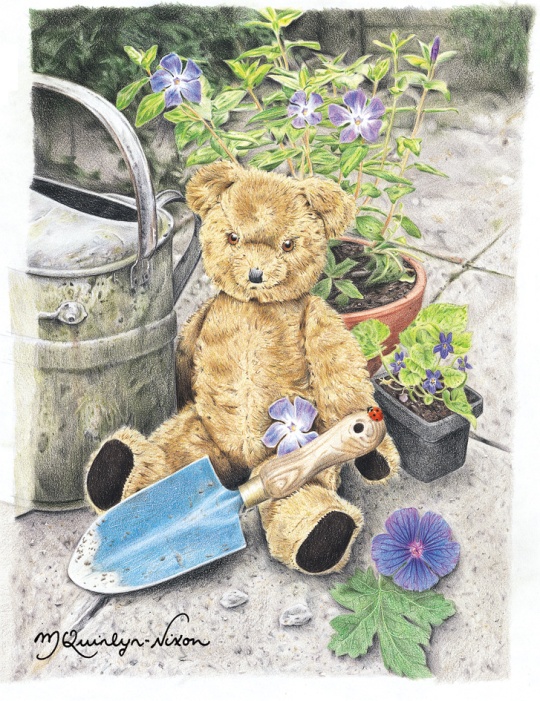 This was my first-ever teddy bear illustration, which was completed on 9th July 1999. I began working on it when my friend, Cherry, came to stay with me for a couple of days in the summer of that year. I didn’t know it then, but it was to be the first of over a hundred teddy bears that I would draw over the next fourteen-years. It was a special illustration in many ways, as it incorporated the first-ever teddy bear that I was given by my grandparents, Georgina and Henry Lake on my first-ever Christmas Day. The teddy bear, originally and rather unimaginatively, named ‘Ted’ has weathered the years well and still has a very faint growl when he’s turned upside down (which is rather a cruel thing to do to a teddy bear). My grandparents were keen gardeners, so I included some gardening tools and plants in the picture: a wild geranium, a periwinkle and a sweet violet. I can see masses of my Grandmother’s pink Japanese anemones flowering in my garden, as I write this post.

‘Ted’ – who sits by my bedside – is particularly special to me at this point in time, as it brings back so many wonderful memories of special grandparents. Some people who come into our lives are completely irreplaceable and no one can fill that particular gap that they leave when they are gone. The important thing is to treasure these special people while we can… 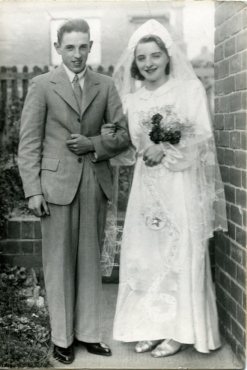 My grandparents, Henry and Georgina Lake in their wedding finery.
They were married on 5 September 1942.  This photograph was taken fourteen-days later, as gale-force winds had ruined the official wedding day photographs.

Those we love don’t go away,
They walk beside us every day,
Unseen, unheard – but always near,
So loved, so missed, so very dear.